We’ve discussed VMware’s focus on the UX and Time-to-Value (TTV) with vRA 7’s much-improved Deployment Architecture and the new Deployment Wizard, which automates the end-to-end deployment for for monolithic or distributed vRA implementations. This alone will drastically change the perceived complexity of installing the solution. But now that we’ve got that out of the way, why not take it one step further?

Once vRA is installed, there is still a significant amount of initial configuration and logic building to be done. While this allows customers to build a tailored solution based on their requirements and desired logic, it wasn’t very POC or quick-start friendly. It can take an experienced vRA admin another hour or so of configuration before being able to log in and request/deploy the first IaaS machine. For the inexperienced POC’er, this can be a brutal process no matter how well VMware attempts to document each step. In the spirit of automating automation and improving the quality of life for the average vRA admin, VMware has delivered a clever way to quickly tackle this. It’s called XaaS (aka anything-as-a-service, previously referred to as the Advanced Service Designer). In short, it’s an XaaS form and a set of vRO workflows that help vRA deliver itself as a service.

It all starts with the Deployment Wizard.  At the very end of the wizard, admins have an opt-in option that, if invoked, creates a new local user (configurationadmin) and publishes the “Initial Config” XaaS service to the user’s catalog. 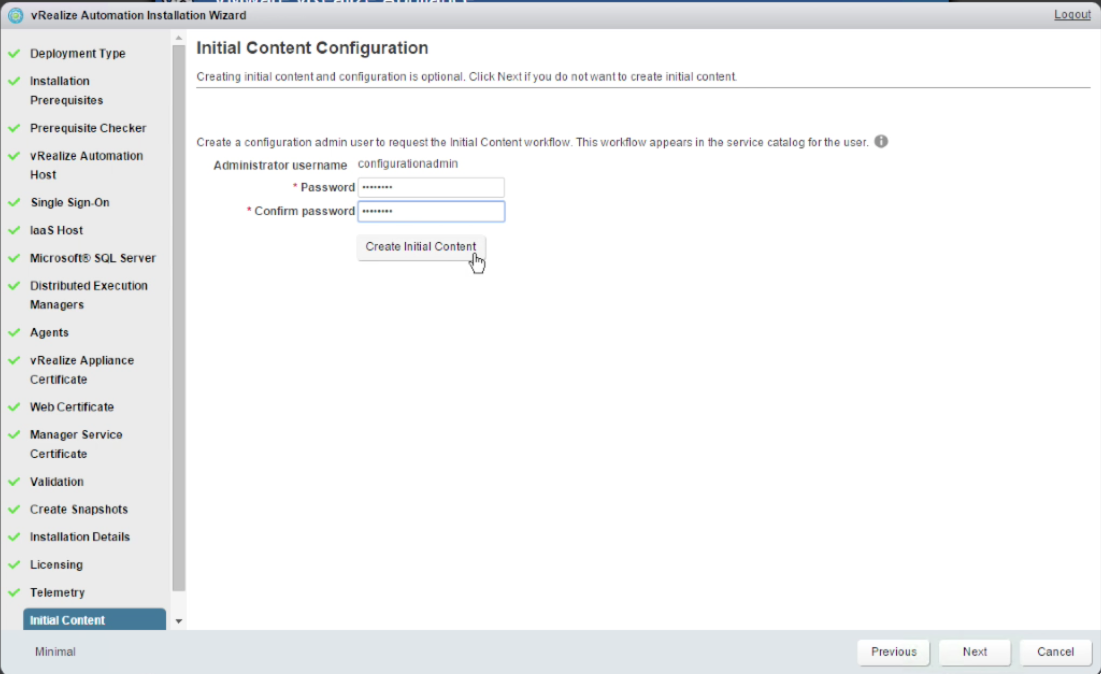 At login, the configurationadmin can launch the XaaS Service to start the the wizard… 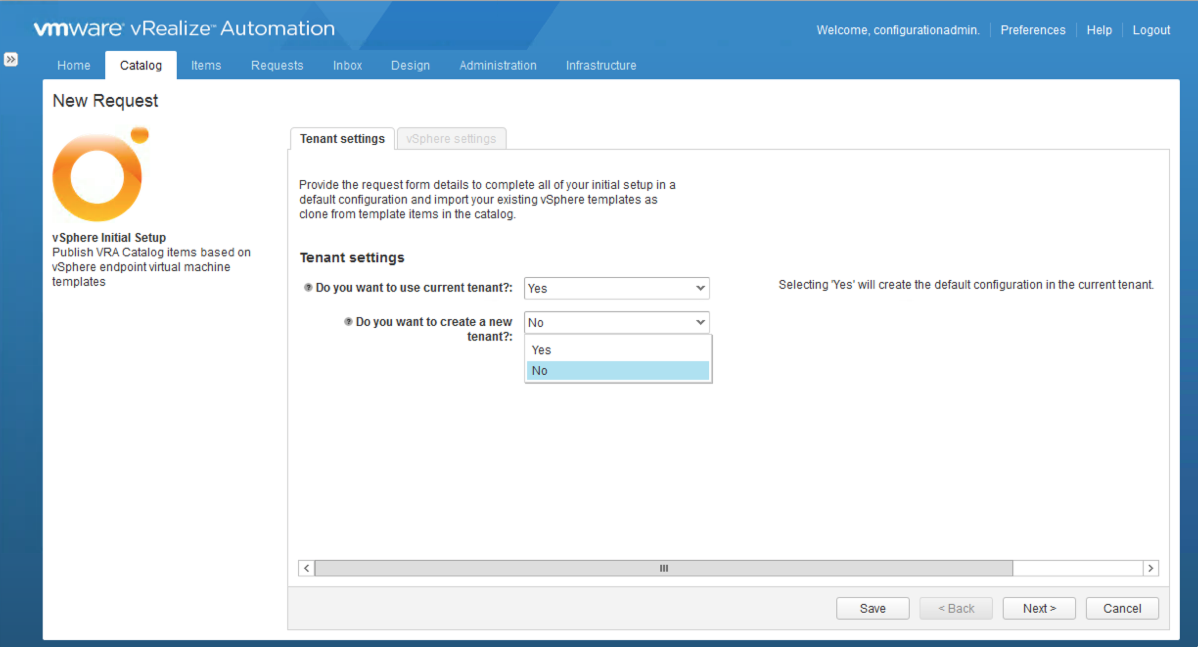 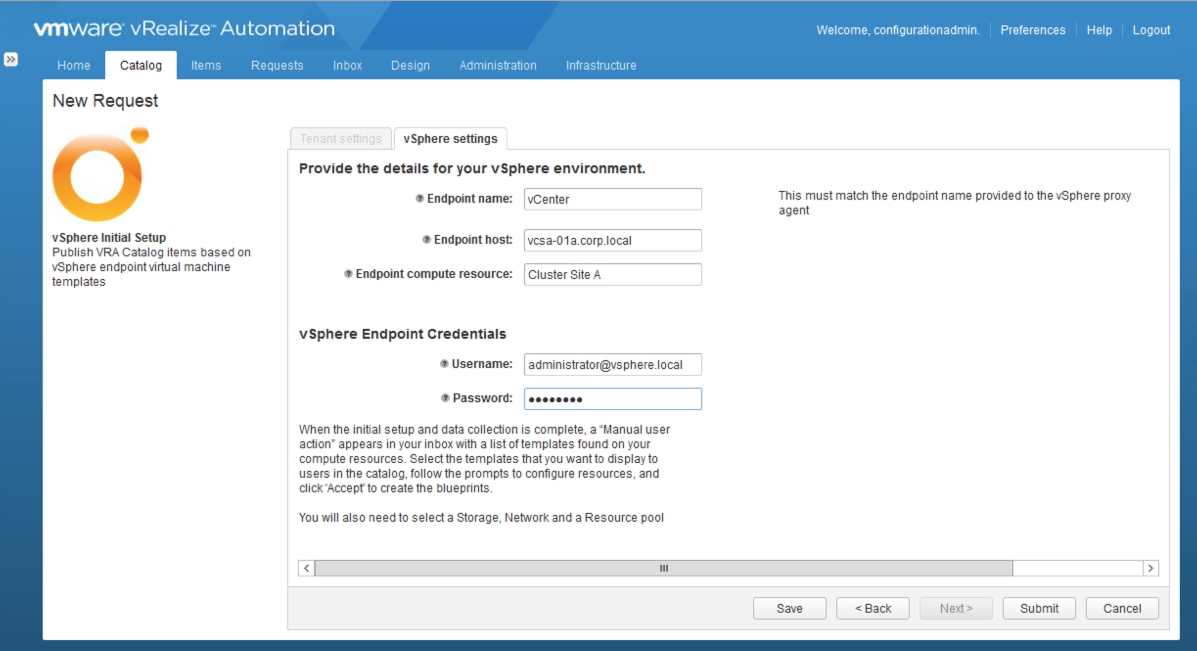 Once submitted, the associated workflows go off and apply all the configuration details per the inputs. Wait, there’s more! The workflow then waits for an Endpoint inventory to complete and returns to the configurationadmin in the form of Manual User Action under the Inbox tab…

This manual action allows the configurationadmin to input some additional parameters that first required an endpoint (vCenter) inventory collection — datastores, networks, templates, allowing the wizard to complete the Reservation config. Best of all, the service will allow you to select any templates collected by the inventory and will automatically create and publish [converged] blueprints for each one! 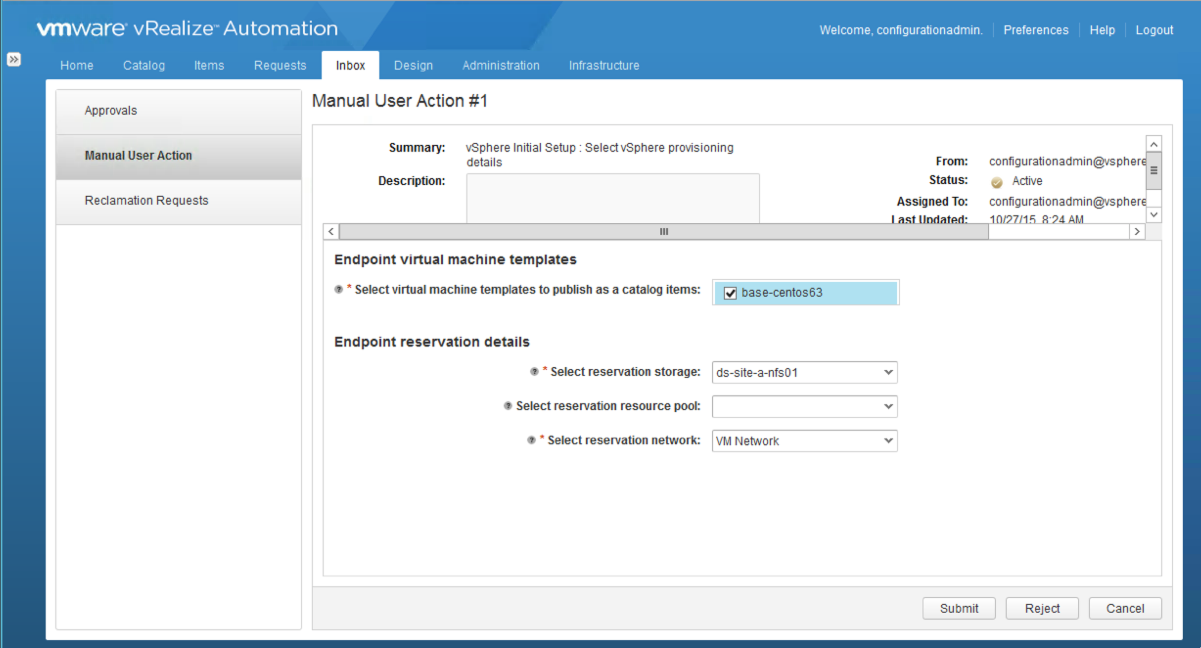 Once complete, you are able to immediately log into the freshly configured Tenant (if a new one was created), click the Catalog tab, and request any of the Blueprints for provisioning. At this point you can expand on the initial configuration to add icons to the Catalog Items, add Entitlements, and any other desired customizations.

The initial config wizard does all this in under 10 mins (can be more or less, depending on several factors of course). Pretty awesome, yes?

Going Under the Covers

Now let’s dive into the engine(s) that make this all possible — XaaS and vRO. vRA 7 ships with an updated vRO plugin that includes all the workflows to make the Initial Config service possible. The XaaS Designer (previously known as ASD) is then leveraged for consumption within vRA. Let’s take a closer look…

The service itself is created in the XaaS Designer and can be viewed/copied/modified by going to the Design tab and selecting XaaS Blueprints.

In edit mode, you can navigate through the different tabs in the XaaS forms designer, which exposes the various inputs required by the associated vRO workflows. Here’s a side-by-side…

What I love the most about the Initial Config service is the fact that it leverages key out-of-the-box capabilities of vRA to pull this off. It also demonstrates the power of the pairing of vRA and vRO to rapidly deliver XaaS in ways not possible on any other platform. Just to be clear, XaaS is not a new concept…it was introduced with vCAC 6.0 as the Advanced Service Designer (ASD). But it’s features and use cases continue to evolve as customers find new and innovative ways to leverage it. And in this case, VMware not only delivers a valuable capability but also found a way to take a major pain point out of configuring vRA